0 Central Ostrobothnia Diaspora around the world 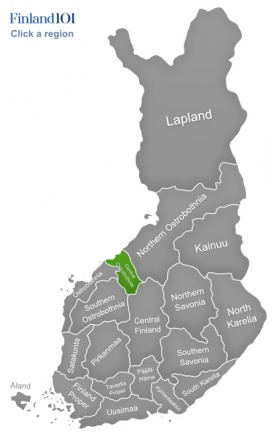 Located next to Northern and Southern Ostrobothnia and also bordered by Central Finland, Central Ostrobothnia is best known for the immense University of Applied Sciences which finds itself at the heart of the region. However, the encouraging presence of this facility does not accurately represent Central Ostrobothnia as a whole, for the small cultural and historical attractions here, merely symbolize the resilience of the region in spite of some obvious and severe economic problems. With one of the largest selections of degree programmes in Finland, Central Ostrobothnia University of Applied Sciences is an incredibly large university with an onsite campus and several more in neighbouring towns. In many ways, this impressive university is the most important aspect of the town given that the economy of  Central Ostrobothnia has struggled in recent years, to cope with the increasing mean age of local residents and a severe lack of qualified personnel. Manufacturing of metals and vehicles have long been the main driving force behind the region which also has an influx of chemical plants and like much of Finland, a concentration on agriculture. Unfortunately, this means the region is mainly focused on exports, something which is unfortunately with the people as evidenced in the number of youth who leave the rural villages in the area in search of a more prosperous career elsewhere. In fact, these issues and the continuing decline of persons of working age in  Central Ostrobothnia is now a subject which the government are motivated to rectify with a number of plans in place to return long term stability to the region. In terms of attractions, some natural countryside and scenery surrounds Central Ostrobothnia but the quaint villages and humble offerings in each one is often the highlight, from the Makiraonmaki Museum and Cultural Centre and beautiful wooden church, Kannuksen Kirkko , in Kannus, to The Toivonen Animal Park and Peasant Museum in the old wooden town of Kokkola.Another highlight of these unassuming villages is often the food, for local cuisine is quite different to neighbouring countries with the Karelian pasty being particularly delightful, a thin pastry with a rye crust.

Central Ostrobothnia is not the ultimate tourist attraction in Finland, neither is it the most prosperous in terms of economy but for anyone who travels through this region there is still a unique opportunity to experience a small part of Finland where culture and heritage are still present in a string of unassuming and charming little towns.