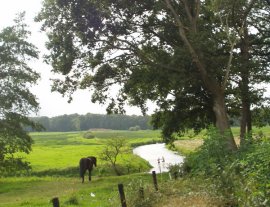 Drentse_Aa_RA - Serassot from nl
[GFDL or CC-BY-SA-3.0], from Wikimedia Commons 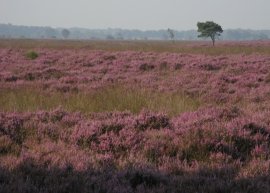 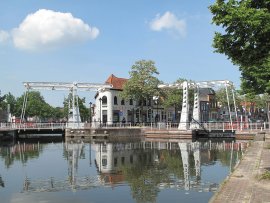 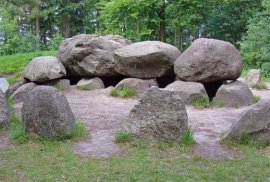 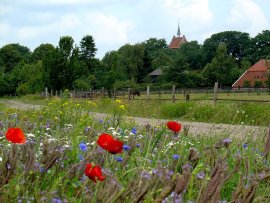 Zicht_op_Anloo - By Gouwenaar (Own work)
[Public domain], via Wikimedia Commons

Drenthe is interesting because it has once been the most densely populated area in Holland – but that was before the Bronze Age even began! Today, Drenthe is one of the regions in Holland that is quite sparsely populated. Less than 500,000 people live in this Dutch region, and most of the time Drenthe is very quiet and calm. The peace is only disturbed once a year when masses of bikers come into the region for a big race.

Drenthe's economy is mainly based on agriculture, however, you will also find some industrial areas around the bigger cities and towns. Tourism plays an increasing role in Drenthe's economy. The Dutch “region of cycling” is particulary popular with people who enjoy cycling holidays as Drenthe is a paradise for cyclists (like other parts of Holland it's very flat), and there is a cycle path network that spans over 1,400 kilometres. If you expect to find lovely lakes and rivers though, you might be disappointed because there aren't any really outstanding bodies of water in this Dutch region.

Drenthe is also famous for its many so-called “hunebedden”. The hunebedden are passage graves that are at least 5,000 years old. 54 of them were found in Drenthe, and there are also some great places in the region that will teach you about the meaning of these hunebeddens.

Part of the Drents-Friese Wold National Park is located in Drenthe, and well worth a visit. There are drift-sands, forests, and heath lands on an area of about 61 square kilometres. There also is a special brook in this national park: the Vledder Aa. And why is it special? There are not that many natural brooks left in Holland, and the Vledder Aa is one of the few remaining natural ones. Animals that you might encounter in this national park are pine martens, common ravens, the smooth snake, and the great crested newt.

Emmen is quite an interesting city to visit when you are in Drenthe, as you can learn a lot about the development of the region in this city. Emmen itself only was home to around 3,000 people in the 19th century, but the careful planning and expansion of the city led to the fact that there are now well over 100,000 people living in Emmen and the surrounding area. The Dierenpark Emmen is one of the big visitor attractions in Emmen. Around 1.5 million visitors from Holland and other parts of Europe visit this animal park every year, and of course this also turned the park into an important factor for the local economy.

Assen is the capital of the Drenthe region, and around 67,000 people live there. Assen was founded in the 13th century, and it basically was only founded because a better location for a convent had to be found (the old location tended to be flooded a lot), and over the centuries Assen grew into a bigger town. The convent is no more, but in its former location, you can now visit the Drents museum. The museum offers a mix of art and historical artefacts, so you can learn about history as well as admire some art.

Assen is also the home of the famous TT circuit Assen. Fans of motorbikes often call this place the “cathedral of motorcycling”, so if you have an interest in motor-sports, you might want to drop by.

Westerbork was a transit and detention camp in Hooghalen. You can visit the camp each day of the week (but note that the camp is only open during afternoons on Saturdays and Sundays). The Astron, the Dutch Institute for Radio Astronomy is close to the former camp site (which you might or might not be interested in), and you need to be aware that you are not allowed to use any electrical devices or motorised vehicles if you want to explore that area because it would disturb the activities in the observation institute. This means that you will have to leave your car at the museum (or get there by train), and turn off your mobile devices if you decide to go on the two mile hike to the former camp site to see the site and the memorials.