0 Lapland Diaspora around the world 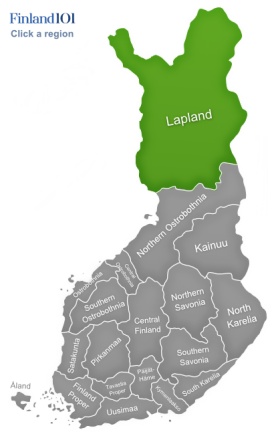 Lapland is a remote region in Finland, best known to the world for being the home of Santa Claus and a beautiful wilderness with ample fauna and flora. In the south, Lapland is situated next to Northern Ostrobothnia and to the west you will find Sweden and Norway. And then in the east you have Russia meaning this really is a major intersection, albeit one in a very remote wilderness. A significant of Lapland is also included in the northern Arctic Circle.

Three rivers, Muonio, Tana, and Torne create the borders for Lapland. There is a good mix of land and bodies of water in Lapland with Lake Inari being the largest in the region (1,102 km²). The tallest mountain in the region is Halti. It’s found on the border between Finland and Norway and on the Finland sides reaches a top height of 1,324 m.

In 2015 the average temperature in Lapland was very cold at 2.6 °C and the coldest month is usually January.

There is a long winter in Lapland and it can last upward of seven month. Although the northern reaches are first to receive snowfall, this will generally arrive around October and can keep a thick cover all the way through April. After that is usually starts melting quickly and the warmest month of July soon follows and it has an average temperature of 13.8°C.

Rovaniemi is a very large town and central to the economy of Lapland. In fact, it is the largest town in Europe in terms of geographical size. That being said, the size is irrelevant to the main attraction here and Rovaniemi hosts nearly half a million visitors each year most of whom arrive to visit the official home town of Santa Claus, which is appropriately called Santa Claus Village. It’s located just 5km from the center of the Arctic Circle and a truly magical place to experience, especially for young families.