0 Southern Ostrobothnia Diaspora around the world 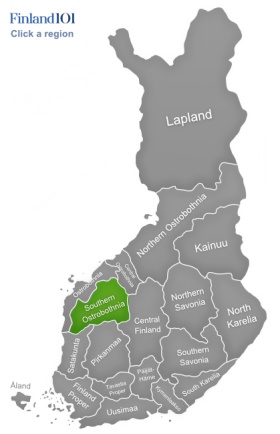 Southern Ostrobothnia has a subarctic climate, which is characterized by short, mild summers and long, freezing winters with plenty of snowfall. Temperatures here can range anywhere as low as -13 °C in the winter to as high as 18 °C in the summer month of July.

As for the population, Southern Ostrobothnia is home to almost 200,000 people with most of the locals living within the major cities and near the impressive Lake Lappajärvi.

One of the most unique natural wonders of Southern Ostrobothnia, Lake Lappajärvi is named after the municipality of Lappajärvi. There are many lakes in Finland of course, but what makes this one stand out from the others is that it was formed thanks to a meteor crater and there are only a few of them found throughout the country. Dating back to a prehistoric past, the impact that led to the Lappajärvi Lake forming is said to be over 75 million years old in the Late Cretaceous period. It is the subject of constant study and research and is helpful in identifying what the area around Finland might have looked like millions of years ago.

Kärnä Island is a single island located in the middle of the lake and it gets its name from the type of black rock that was formed from the original impact. Two towns, Lappajärvi and Vimpeli, are also located on the shore of Lake Lappajärvi.

The region of Southern Ostrobothnia has some very interesting and unique culture, including both TV stars and legendary sweaters. Both of which are treasured throughout the country of Finland and even beyond its borders.

The Dudesons is a reality TV show that was first piloted in 2000 and included four teenagers from the city of Seinäjoki, which is located in the region of Southern Ostrobothnia. This show included many stunts and extreme winter sports and after creating both Finnish and English versions of the show it only took a couple of years for it to become the most popular TV show that had ever been created in Finland.

Another cultural icon that was created in the region of Southern Ostrobothnia is the Jussishirt, which is a worn by many men there, as well as others around the rest of the country. Jussi is known to be a very masculine Finnish name and the sweaters are usually gray with red diamond patterning around the chest.