13,149 BRADY members around the world 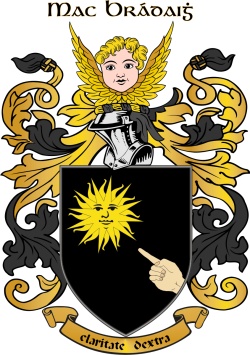 MacLysaght in 'Irish Families' (1985) comments on the mistaken use of 'O' as a prefix.

The Bradys were a strong sept of Breifne, in what is now Co Cavan. Chiefs of Cúil Bhríghde, they feature in the Annals of Ireland, for example in the 'Annals of the Four Masters'. The surname is still strongly represented in that county, and in adjacent areas in Co Meath. In 1890 in Co Cavan, Brady had the third highest number of births registered (85). Woulfe says that they are well represented in Ulster ('Sloinnte Gaedheal is Gall', 1923).

Oddly enough, a family of O'Grady are 'said' to have adopted the surname Brady, temp Henry V111, at which time they became protestants. Bishop Hugh Brady was the first protestant Bishop of Meath; he was said to be really an O'Grady of Clare stock. This was the Co Clare family of Tuamgraney. The famous 'Bishop's Lady', a violent ghost in Michael Hogan's great 19th century Limerick poem 'Drunken Thady and the Bishop's Lady', was married to a Bishop Brady (Hugh's wife?) Hogan refers to the surname issues as 'fictions' in his poem!

In the 1659 'Census' carried out by Sir William Petty, Brady is listed as a 'Principal Irish Name' in the following counties:

Co Cavan returns are missing from the 'Census'.

Co Leitrim
6 families of Brady in the barony of the same name.

Co Clare
10 families of Bruody in Tulla (which hardly suggests O'Grady to me, but could well be a source of Brady).

In Matheson's Report (1909) on Birth Registrations taken in 1890, Brady births were most prevalent in counties Cavan, Dublin, Antrim, Meath and Longford. It was the 57th most numerous surname in Ireland in 1890.

Philip MacBrady (fl 1711) A Cavan Brady, scholar and poet, was a protestant clergyman, well known for his satires.

Joe Brady (1857-1883) born in Dublin, one of 20 children, to a paviour of Dublin Corporation. One of the 'Invincibles', a secret nationalist, extremist group. He was knife wielder in the stabbings of British Chief Secretary for Ireland, Lord Frederick Cavendish, and permanent Under Secretary Thomas Henry Burke, as they walked in Phoenix Park, on the 6th May, 1882. Apparently, Cavendish was not an intended victim. Brady was later hanged at Kilmainham.

Tell us about any famous BRADY (or surname variant) you think we should add here. We will get our genealogists to check them out and add them to the list. Thanks!

Join the conversation with the BRADY tribe

I am trying to trace my gg-grandmother Ann Brady. She was married to Bernard McMahon and they had several children including my great grandmother Roseanne who was born around 1855. I have found a birth certificate for her brother Ross who was born in the parish of Drung. The family moved to Leith, Scotland around 1870. I have had no luck on Ancestry so any information would be appreciated. Thanks

OK, sorry, my grandmother's cousins were the Dalys. My g-grandmother was Sarah Daly, and she married William Brady, and they had my grandmother, Evelyn Teresa Brady. Thank you

Would like to pick up connection in Ireland for my g-grandparents, who came to New York in the US around 1900.. They were William J. and Sarah Brady. I do not know my g-grandmother's maiden name, but they were married in Ireland before leaving for the US. My grandmother, Evelyn Teresa, was born in New York in 1910. They all appear in the census records, but as yet no records on port of departure, ship name, or town/county of marriage or origin have come to light. Once I asked m grandmother where her family was from and she said Tralee, so it could be they left from there, maybe lived and were married there?

The only thing I know about mine surname is that is Brady, and the spell has been changed a few times in our history. Also that my great grandfather's father was given land from the king of England, land which my Bradys still own and live on today, which is on North Carolina. Could anyone tell me how to find out was Brady family, I originate from?

Can i get some information on this family. My gg grandfather was Patrick Brady from Marsh Road in Drogheda. His eldest daughter was called Rose. Patrick died in 1893 in Drogheda. Rose died in 1919 in Dundalk and is buried in St Mary's Drogheda. My great grandmother was Mary Hanratty nee Brady. She lived in Halifax, England and is buried there.She died 1904. On Mary's wedding certificate there is a Margaret Brady as a witness.Maybe she is a sister? Also i found a wedding certificate online for a Julia Brady from the Marsh Road who had a father named Patrick for 1882. This states Patrick was alive then. Can anybody tell me is Margaret and Julia part of my family? I have no record of Patrick's wife. I have found a newspaper notice online for

Looking for family members in Ireland My family Was John and Catherine Brady from Caven Ireland There son William Brady is My Great Great Grandfather. We are having a reunion this summer July 14th. Please contact me.

Areas of Origin for BRADY

Write an email address and click 'Invite' to share this page with more members of the BRADY tribe.

Discover where the BRADY Family members live around the world

Show off the BRADY Family Crest…