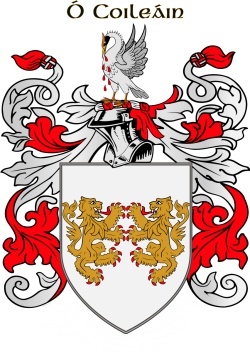 Ó Cuileáin- added by Woulfe in 'Sloinnte Gaedheal is Gall' (1923), not a different name etymologically from the above, but a variant, also anglicised as Collins, as well as Cullen and Quillan etc.

However, he adds that several distinct septs of Ó Cuileáin once inhabited Cos Galway, Tyrone, Tipperary and Cork, and possibly also Clare and Sligo.

Collins is also a well known English name, and possibly a few will have this origin, as Cromwellian soldiers for example. This would not affect its status as a Gaelic Irish name in the top 50 in the country.

The Ó Coileáin sept were lords of Uí Conail Gabra, that is the baronies of Connello in Co Limerick. Pressure from the Geraldines at the in the 13th century caused them to move to West Cork, near their kin, the O' Donovans. The picture becomes complicated because the Ó Cuileáin sept of the Corca Laoidhe, according to MacLysaght ('Irish Families' series, 1980, 1982) already inhabited this area!

The picture becomes more complex still: according to Woulfe, a number of Ó Coileáin had earlier moved to West Cork in 1178.

In the 1659 'Census' of William Petty, we find the following among the 'Principal Irish Names' of that document:

Returns for Cos Galway and Tyrone are missing. I found none in Co Tipperary.

In the Registrar's Report on surnames in 1890, most Collins births were in Cork, Limerick, Dublin, Galway and Antrim.

An early emigrant, a Collins from Offaly, was a governor of Tasmania and a founder of Sydney. There have been comparatively few Irish explorers but a Collins has been recorded in the Arctic. In America there is a family of Collins that were ship-owners; they left Ireland in 1635.

The most well known of the Collins family was none other than Cork man, ?The Big Fella?, Michael Collins, a leader of the 1921 guerrilla war against British Crown Forces, and founder of the famous 'Squad' which neutralized British Intelligence operations in Dublin. He was killed, aged 32, in an ambush of his Free State Army motorised convoy at Béal na mBláth in Co Cork, by an anti-Treaty force of his former comrades.

All in the Mouth of Flowers,
And in the month of flowers,
In the deepening shades of evening,
died Mícheál, Ireland's darling.

Tell us about any famous Collis (or surname variant) you think we should add here. We will get our genealogists to check them out and add them to the list. Thanks!

Join the conversation with the Collis tribe

(Part 1 of 3) The Collins name has a long history in British Isles, but now DNA and some recorded history says their origin is from the Emerald Island. The Collins story [dominated by DNA tribal marker R1b-L513, Subgroup B2] can trace their origins to the Finn Valley in Donegal, Ireland from 50 BCE. Perhaps the journey begins with the Clanna Dedad; Deda, son of Sen or Deda Mac Sin. The Collins surname origin is from Clan Domnaill [DNA Tribe R1b-L513, Subgroup B1] and relations who remain in Ireland take the modern surname (O’)Donnelly, McDonald and Donohue in Ireland.

(Part 2 of 3) According to research, the Domnaill name is also found in Brittany, France. It is a very old name which appears in the 5th century Roman inscriptions as Dumnovellaunos in Brittany meaning “Deep Valour” equivalent to Irish Domhnaill. But how could this be? Recent discoveries from DNA testing are unlocking the migration patterns of Celtic tribes as late as 800 CE to 1200 CE. The Collins story begins in pre-history Ireland then members of his family move to Wales where the family can be traced back to their Welsh tribe Cydifor Fawr. Many of his kin will then move to Brittany, France during the Dark Ages.

Areas of Origin for Collis

Write an email address and click 'Invite' to share this page with more members of the Collis tribe.

Discover where the Collis Family members live around the world

Show off the Collis Family Crest…