50,002 DALEY members around the world 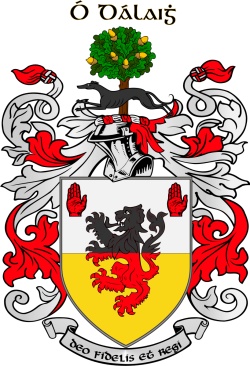 Ó Dálaigh- anglicised Daly, Dawley, Daley, the root has been given as Dálach, 'frequenter of assemblies', 'fond of meetings' &c. which sounds rather cumbersome in English for a given name, as this would have been.

'Literary', 'poetic' 'bardic' are epithets that may well be applied to this extraordinary family. They are unrivalled as the literary family of Ireland, par excellence. A sept of the Southern Uí Néill, chiefs of tribal grouping Corca Adain, whose original territory was in the barony of Magheradernon in modern Co Westmeath, they spread out from their homeland to set up schools and bardic centres in several parts of Ireland. One individual, Cuchonnacht na scoile, which means Cochonnacht of the school, is said to be the progenitor of all the bardic families. He died at Clonard in Co Meath in 1139. From Clare to Cavan to Co Cork their poets earned for them an illustrious name. Here is a brief resumé:

1) Donnchadh Mór Ó Dálaigh (Donogh More O Daly) was the first of a line of poets inhabiting Finavara in the Burren of Co Clare. About Donough More, the 'Annals of the Four Masters' has under the date 1244: 'Donogh More O Daly, a poet who never was, and never will be, surpassed, died and was interred in the Abbey of Boyle'.
2.) Raghnall Ó Dálaigh, who flourished in the 12th century, was chief ollamh (master) of poetry to the MacCarthys of Desmond (now part of Cos Cork and Kerry), and founded the families of that region.
3) The Co Cavan O Dalys became bards to the O Reillys.
4) The O Dalys were hereditary poets to the O Neills of Ulster.
5) O Dalys were also bards to the O Connors of Connacht.

Moving on to the Cromwellian survey conducted by Sir William Petty in 1659, known as the 'Census', though it is far from complete, we may look for (O) Daly as a 'Principal Irish Name' in that document in:

Co Westmeath
Corkerie (names for baronies), Dalie, 8 (families not individuals, for all figures); Magheredernon, Daly, 25; Moycashel, Daly, 26; Farbill, Daly, 12; Clonlonan, Daly, 10 and Dully, 5; Kilkenny (barony not county!) Daly, 8. From this we can see there were substantial numbers of Dalys in their original territory in the mid 17th century.

R.E. Matheson's 'Special Report...on Surnames in Ireland' (1901) based on the births distribution figures for 1890, shows most frequency for Daly in counties Cork, Dublin, Kerry, Galway and Offaly. The total number of births was 360. Daly occupied 24th place in most common names in Ireland in 1890.

Edward Daly (1891-1916) born in Limerick, was one of the officers of the Irish Volunteers in the 1916 Easter Rising. He was also a member of the I.R.B. (the secret Irish Republican Brotherhood). He commanded the 1st Battalion in Easter week, and was based at the Four Courts, and to the north and west of the centre of Dublin. He was the youngest to hold the rank of Commandant, He was shot by a British firing squad on 4th May 1916.

Richard Joseph Daley (1902-1976) the inspirational Democrat Mayor of Chicago for 21 years. As a leading Irish-American, his backing of JF Kennedy in 1960 was crucial. He was linked very much with the Kennedys. He came from the tough South Side of Chicago, and remained true to his ethnic and class roots. Suspicions of 'corruption' were unlikely to phase this wielder of power in a world of politics where Irish Catholics had to fight their way up.

Tell us about any famous DALEY (or surname variant) you think we should add here. We will get our genealogists to check them out and add them to the list. Thanks!

Join the conversation with the DALEY tribe

the only information I have is that my Irish g.g.grandfather was William Mills Daley, he was on a schooner out of New York USA, in the year 1835, thus family were there prior to the potato famine. I understand that family were originally from Larne in Cork, ???? I hope that someone will be able to expand on this information and come back to me as soon as they have time. Thank you for your help.

ONE OF MY ANCESTORS WAS ,, HUGH DAILEY born in belfast, ireland ... he married ELEANOR OBRION-they had sons , JESSE DAILEY,JOHN DAILEY- I DONT KNOW THE OTHER NAMES .... IF YOU KNOW THESE NAMES WE ARE FAMILY PLEASE WRITE BACK SOON - THANK YOU

Areas of Origin for DALEY

Write an email address and click 'Invite' to share this page with more members of the DALEY tribe.

Discover where the DALEY Family members live around the world

Show off the DALEY Family Crest…