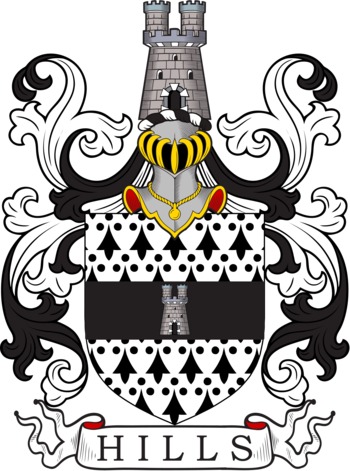 Design your own Hills Family Crest

There are approximately 38,399 Hills family members around the world. In general you can double this figure to include those related to the Hills names to allow for those connected to the name through maiden name connections.

An English variant of Hill.

A widely distributed English and Scottish topographic name for someone who lived on or by a hill, from Middle English hill (Old English hyll).

Topographical surnames were among the earliest created, since both natural and man-made features in the landscape provided easily recognisable distinguishing names in the small communities of the Middle Ages; in this case especially, because every small district had its rising ground called "the hill", and the surname is therefore extremely popular in every area of the country.

The medieval personal name Hill, a short form of Hilary (see Hillary) or of a Germanic (male or female) compound name with the first element hild ‘strife’, ‘battle’.

In Germam, it is derived from a short form of Hildebrand or any of a variety of other names, male and female, containing Germanic hild as the first element.

In Jewish (American), the surname is an Anglicised form of various Jewish names of similar sound or meaning.

It is also an English translation of Finnish Mäki (‘hill’), or of any of various other names formed with this element, such as Mäkinen, Heinämaki, Kivimäki.

Joseph Hills, an English convict from Cambridgeshire, was transported aboard the "William Metcalf" ship on 23 May 1834, settling in Van Diemen's Land, Australia.

In 1891 census, the surname was recorded in England and Wales with 8,699 occurrences and a fewer 51 in Scotland.

In 1881 census, the surname was frequent in Cambridgeshire with 407 occurrences.

The noted, Sir Graham Hills FRSE (1926 – 2014) was a physical chemist and principal of the University of Strathclyde. He was also a governor of the BBC.

Areas of Origin for Hills

Write an email address and click 'Invite' to share this page with more members of the Hills tribe.

Discover where the Hills Family members live around the world

Show off the Hills Family Crest…